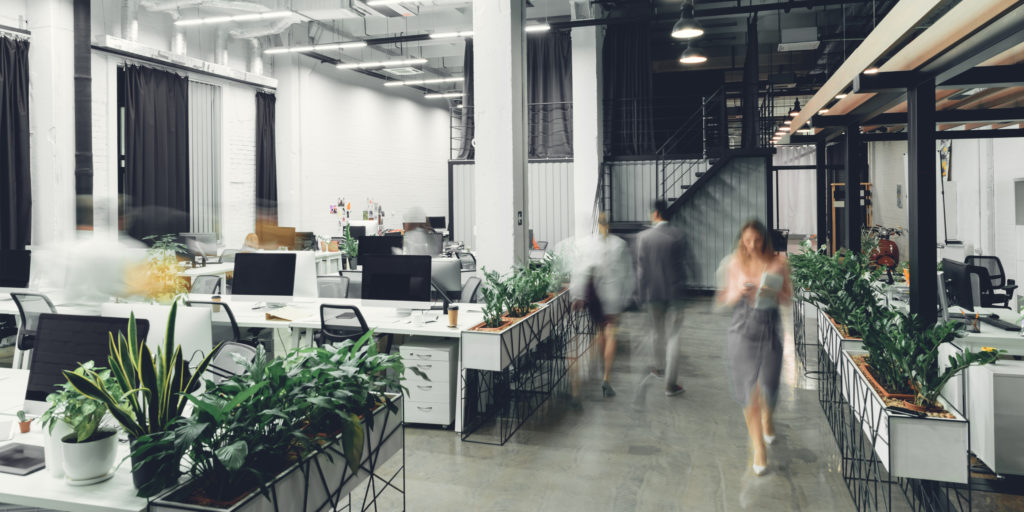 Offices have a long, storied past. It’s where great deals are made, and where world-changing inventions come to life. But how did we arrive at the modern office? And where are offices going in the future? Today, we’ll delve into the history of the modern office to see if we can uncover any secrets to this crucial piece of modern society. If you’d like to convert your office into a more efficient, comfortable, and professional space, then Indoff Office Furniture can help.

The Origins of the Office

Here’s a fun fact, did you know famed English author Geoffery Chaucer is credited as the first person to use the term “office” as a place where business transactions take place? This was way back in 1395, appearing in Chaucer’s The Canterbury Tales. Prior to this, the term was generally used when referring to a position that involved certain duties.

We can find the true birth of the modern office in the 18th century when the East India Company and other large-scale, complex organizations began to grow and take hold of the world. It was during this time that the first office spaces were being built. These buildings were built with the sole purpose of getting work done.

At the core of every office is the need for productivity to thrive. This need gave birth to the office cubicle. In 1964, office equipment company Herman Miller teamed up with industrial designer Robert Propst to create a concept of a “modern” office that would fight against the monotony of past office spaces, thus allowing for higher degrees of creativity to flourish. What they came up with was known as the “Action Office,” a precursor to the modern cubicle. Today, the cubicle is seen in a less-than-flattering light but its original intention was to create a private setting where employees could work without distraction, thus letting their creativity and productivity flow.

Japan in the 20th Century: Birthplace of the First Open Plan Offices

One the other side of the spectrum is the 20th-century Japanese office. Japanese offices pioneered what is known as an “open plan” which mostly relies on ergonomic decisions that aid in making employees as productive as can be. Unlike most American offices, Japanese offices have no walls dividing desks or cubicles; individual offices are also eschewed in this open floor plan. In order to ensure productivity, the office or group leader sits at a prominent position. From this spot, the leader can assign tasks and keep tabs on work as its completed. Since this open-plan does away with walls, team members are able to speak freely with one another in case they require assistance or guidance. If this sounds like your current office layout, then you’re in good company! It wasn’t long before the open office plan pioneered by Japanese businesses found its way to other offices all across the world.

There are countless industries in this world of ours. As such, some industries may benefit greatly from open plans while others are actually more beneficial with cubicles or team spaces. It all depends on the particular industry. But with the advent of the internet and the turn of the century, offices actually evolved to become more personal. So much so, in fact, that many individuals have gone on to work from home. Everyone from architects and freelancers to therapists and photographers has made the move to home offices. Although there is still a prestige that comes along with a physical office address, there’s unbridled freedom that comes from working at home. In fact, many modern companies have remote workers who live in different cities or countries. All this can be done thanks to the advancements in technology and internet connectivity.

Coworking spaces are an interesting development in the trajectory of office spaces. Sometimes, working from home just isn’t in the cards. Perhaps you don’t have an extra room to spare or your family is much too loud for you to properly speak with clients over the phone without interruptions. This is where coworking spaces can come in handy. Coworking spaces seamlessly combine the idea of open-plan offices with the premise of remote work. For low monthly rates, you can have your own desk in a modern, state-of-the-art office. Coworking spaces are incredibly popular among freelancers, start-ups, and entrepreneurs so you’ll be in good company. In fact, that’s one of the main benefits of coworking spaces. Since you’re surrounded by likeminded individuals, you can flourish in your own endeavors. Coworking spaces create a unique environment. You’re your own boss, but you’re not on your own. You can take time to speak with those around you and bounce ideas off one another and there won’t be a supervisor keeping tabs on your tasks. As such, creativity can flourish!

Whether you’re planning on converting your spare bedroom into your home office or you’re ready to start renting a space for your startup, you need to make sure you have the right office furniture to guarantee productivity, comfort, and organization. This is where Indoff Office Furniture comes into play. We carry the best of the best in business and office furniture. Give us a call today to learn more about what we have to offer! 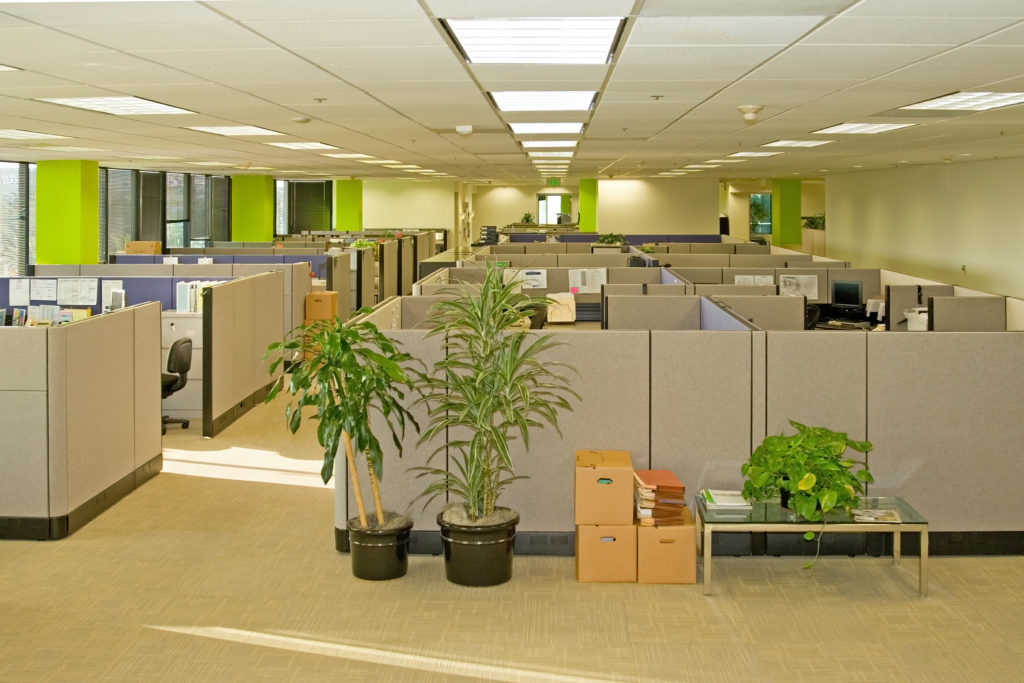 Office cubicles get a bad rep. They are often the target of commentary or jokes regarding office work uniformity or tedium, but the truth is —since their emergence into the workspace in the mid-1960’s— cubicles have proven to be a rather effective way to organize workspaces. Modern day has given us some new ideas about how to better modernize and maximize this office furniture; there is no shortage of creativity when it comes to using the office cubicles in enhancing work output.  Here at Indoff, we know that so much lies in the organization and the configuration of the furniture and why we are in the business of improving workspace layouts and environments.

When they first emerged on the scene, it was known as “Action Office” and the design of the office cubicles was the product of a lot of back and forth discussion regarding ways to improve the productivity of the worker. The design was predicated upon the idea that employees are more productive when they can personalize a space and have a sense of privacy while not being completely disconnected from the other people in the office.

The modern workstations can take many forms. The cubicle has changed since the early versions, but it has kept its most effective features.

Modern office cubicles also offer more options than the traditional ‘cube’ shape. The modern stations can be arranged in a variety of ways with different options on height, material, desk space, and configuration. The modern workstation is a great way to optimize space while providing each worker with their own demarcated work borders. This gives you a great amount of freedom when arranging workers in the best possible arrangements to fit their needs.

Enhance Your Office with Indoff

Indoff Commercial Interiors can help turn your office into a hub of human potential, creativity, and energy. Despite the cubicle’s misrepresentation, the reality is that fifty years later it is still being used as an effective way to organize today’s modern workspaces. Today’s office layouts are being defined and redefined by the concepts that first gave rise to the cubicle in the first place. The modern workplace offers variations and modifications that can suit your employee’s particular needs. Give us a call today! 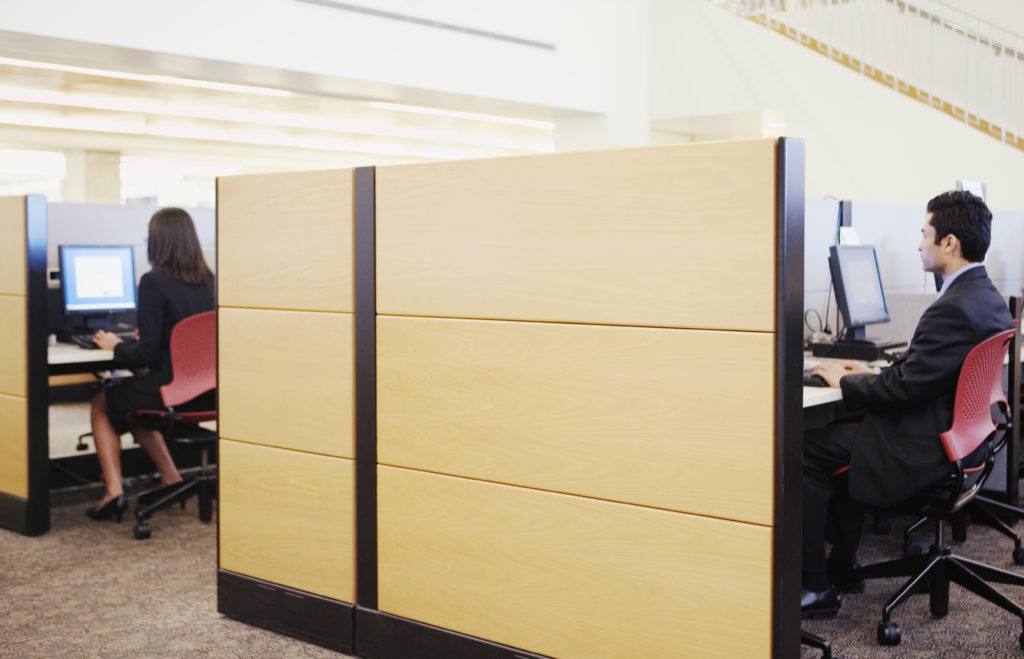 Whether you are a new startup or just moving to a new building it can be a challenge to look out at all that open space and decide what to do with it. The main question at hand will be how to divide the space. You can choose office cubicles or an open workspace. What you decide will ultimately depend on your work culture.

The History of Office Cubicles

In 1960 Herman Miller created a study to examine furniture in the workplace. The study employed behaviorists, mathematicians, and anthropologists. He wanted to know how people worked, how information traveled, and how the layout of the office affected performance. At the time, the common trend for office workspace was an open plan with rows of uniform desks offering no privacy. The study showed that this layout actually interrupted the flow of communication. Robert Propst, who ran the study, found that employees were also suffering from sitting from long periods of time.

Herman Miller designed office furniture to combat these problems. However, the assembly was difficult and employees struggled to construct the workspaces. They then created what we know as office cubicles to maximize the efficiency of small areas.

Maximize Efficiency in the Workplace

Multiple other studies have been conducted throughout the years to find the optimal work environment. “Cube farms” are often noted in a bad light in multiple comic strips depicting life in the workplace. However, there are benefits to be found in both open workspaces and rooms divided by office cubicles. It is actual quite possible to increase productivity and foster open communication by changing the layout of the office.

Office cubicles are great for creating privacy for employees. There are also options that offer segregated space with an open feel. An open space can foster more communication and collaboration. Giving employees the option to sit, stand, and walk around will also create a more relaxed workspace that can lead to higher workplace contentment.

When it comes to choosing cubicles or opting for an open workspace, you want to access your corporate culture. Do your employees require a lot of dedicated focus? Do you need a constant abundance of new ideas? Knowing what your employees need will help you decide between the two options.

The great part about working with Kim Gregory of Indoff Commercial Interiors is the fact that she will help you decide which is best for your company. You can communicate your vision and ideas and she will help those thoughts materialize. She will get you from a drawn sheet of paper to cubicles and office furniture delivered and assembled. Give her a call today to find out more.

Indoff Commercial Interiors is not simply a showroom to browse through an overstock of desks, chairs, and cubicles. What we have is far greater. We offer customer service delivered right to your front door. Kim Gregory will help your vision and needs materialize into an office space that cultivates comfort, great morale, and productivity. Contact Kim Gregory in El Paso to set up an appointment today.